Integrating React into ASP.NET Core using Razzle with all the goodies like SSR, routing, code splitting, and HMR – Part 1/2

To create a React application with server-side rendering (SSR) in .NET, you can usually use a well-known library, ReactJS.NET. Sadly, you might miss some useful features like code splitting or HMR (Hot Module Replacement). You are also constrained in which React libraries with SSR support you can use. E.g., in time of writing this article, there is no support for Typography.js.

What I’m going to present you in this two-part article, is an alternative way, where you have full control over the React side, while still keeping things simple thanks to Razzle and Javascript.NodeJS. We will also fully embrace React and replace Razor views in the ASP.NET Core application with it.

By using server-side rendering, we can deliver HTML content with a single request. It has two main benefits. User doesn’t need to wait while all javascript assets are loaded and initialized to see the actual content, and we make it much easier for SEO bots to crawl our page.

We are going to use the standard React template provided by ASP.NET Core. Although it uses CRA, it still offers useful things, like base SpaServices configuration or publish configuration. Let’s run the following command to create the base of our application.

Now we can focus on transforming CRA to Razzle. First, we will remove the whole ClientApp directory that contains the actual CRA client application and replace it with Razzle. Run the following command to initialize Razzle application inside of the ClientApp folder.

We need to change the root path of SPA static files in the Startup.cs file. We will use a different path for development and production according to paths generated by Razzle.

Next, we must remove the UseSpa code from the Configure method, because we are not going to use ASP.NET Core spa proxy (more on that later).

In the server.js file, we can see the actual server-side rendering inside of an Express server.

The App component is the root of our React application (same as with CRA). This component is converted to an HTML string using renderToString provided by React and then sent to a client inside of an HTML template.

Let’s start the Razzle app to see how it works (for now without the ASP.NET Core part). Execute the following command in the ClientApp folder.

Razzle application is running on port 3000 (even if the output is saying that it is 3001 – more on that later), so let’s open http://localhost:3000/ in our browser. We are greeted by the default Razzle app. By opening developer tools and checking the network tab, we can see the SSR in action. 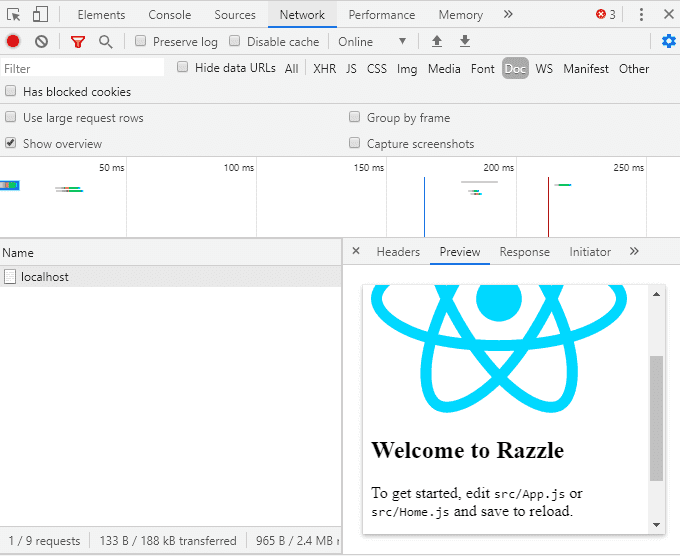 The document returned from the server contains fully rendered HTML. If we make any change to the Home.js component, it gets updated in the browser automatically. So HMR is also working.

This trick is going to be quite helpful. Webpack will serve client-side assets for us independently of our ASP.NET Core side, and therefore, we will have HMR without any hassle. We won’t even need to use a proxy between ASP.NET Core and Webpack dev server in contrast to a CRA solution.

Let’s extend our application a little bit to be able to experiment with routing. For that, we will replace the Home.js component with two other components - HeroList.js and HeroDetail.js. For now, these will be just dummy components and we will extend them later.

We also need to create routes for our new components in App.js.

Let’s check the http://localhost:3000/. We can see the HeroList component rendered, and clicking on the “Hero 1” link brings us to HeroDetail, as you would expect.

We have successfully created a base of our application, but the client-side (React/Razzle) and the server-side (ASP.NET Core) are still disconnected. It’s time to integrate both sides by introducing React server-side rendering into the ASP.NET Core backend.

We need to execute React rendering from the ASP.NET Core backend, but Razzle provides server-side rendering through an Express server by default. An easy way to achieve this integration is to use Javascript.NodeJS library that enables us to call NodeJs scripts from .NET Core. We only need to replace the Express server with a simple function that just returns the rendered HTML.

The first parameter (cb) is a callback function to signal async completion to Javascript.NodeJS.

The entry point for the server-side is index.js, so we need to modify that one too.

We have removed all of the original code, and now we are just exporting the server.

We can now try out the server function. First, we need to build the Razzle application with the following command.

This command generates a production bundle of our application in the “./build/server” directory. It includes the server.js file that contains the whole application built by Webpack.

To call the server function, just run the following command.

Great, we can see the rendered HTML of our React application. We are making some progress, but we surely don’t want to call build each time we change something in our React part during development. Luckily, Razzle does this automatically for us when we start the application in development mode. There is just one little catch. Razzle creates a bundle that also contains server-side HMR, and it will get in our way. If we try to run our rendering function from the server.js generated in the development mode, it will keep running and waiting for changes. Therefore, we need to remove it. Thankfully, we can keep the client-side HMR, which is more significant for us. To remove the server-side HMR, we need to tap into the underlying Webpack configuration by creating a “razzle.config.js” file with a “modify” function.

Now, after we have disabled the server-side HMR, we are ready to start the development server again with the following command.

We can also try to rerun the server function.

It prints HTML, same as in case of production bundle, but now, we can make changes to our React components, and by rerunning the command, we can see that the bundle was updated.

We are going to use the already mentioned Javascript.NodeJS library to call server.js from ASP.NET Core backend. So, let’s add it to our project through NuGet.

We need to register it in the ConfigureServices method inside of the Startup.cs file.

Well, that was rather simple, and we are ready to go. Let’s create a service for calling our function exported from server.js.

We are using ContentRootFileProvider.GetFileInfo to get the path to the server.js file. In RenderAsync, we are calling Javascript.NodeJS (InvokeFromFileAsync) to invoke the exported function in the server.js file. InvokeFromFileAsync returns whatever we send to the callback (cb) in the js function. In our case, it is HTML of the specified route provided as the “url” parameter.

We can now create a custom action result for executing React rendering from MVC actions.

Here we are calling our render service and converting its result into a ContentResult.

We have everything ready to create the actual hero controller.

For now, it is rather simple. We have defined two routes that just return the SSR action result.

We have everything ready to try out our application. Open https://localhost:5001/, which is the default development URL of ASP.NET Core applications. In the network tab of developer tools, we can see that we are receiving a complete HTML from the backend, so the SSR is working.

We have only one small problem left. In development, Razzle serves scripts through HTTP, while ASP.NET Core uses SSL by default. This inconsistency is going to be a problem for us because all modern browsers today disallow mixed content for security reasons. To force Razzle to use SSL, we need to tap into the Webpack configuration again using the “modify” function in razzle.config.js.

First, we are setting publicPath, because HTTP is hardcoded in the Razzle configuration (see https://github.com/jaredpalmer/razzle/blob/2535fbcfc8d8f99d9d0ada4eaed3e994335f2af4/packages/razzle/config/createConfig.js#L90). Then we are telling Webpack dev server to serve content through HTTPS and which certificate to use. For more info about SSL in the Webpack dev server, please see https://webpack.js.org/configuration/dev-server/#devserverhttps.

For storing the certificate configuration, we can use “.env” file. Razzle is then going to provide all keys with the “RAZZLE_” prefix to “process.env” automatically.

Alternatively, we could also just switch the ASP.NET Core backend to HTTP by removing https://localhost:5001 URL from the launchSettings.json file.

We are going to wrap it here for now. We have successfully integrated Razzle with ASP.NET Core backend into a working application with server-side rendering while having HMR during development.

Next time, we are going to add data loading, look into code splitting, and also tackle the problem of deploying our application.

You can find the second part here